Product – Structure of an energy system built up on “Renewables”

“Renewables”, as volatile energy sources, usually do not provide energy, when energy is needed: they require balancing energy or storage systems for a constant supply of energy.

The 4 building blocks of the system:

The current requirements for each building block include various challenges.
Also, in the interaction of these components, there are considerable potentials.

Storage is the “Achilles heel” of the turnaround energy policy. 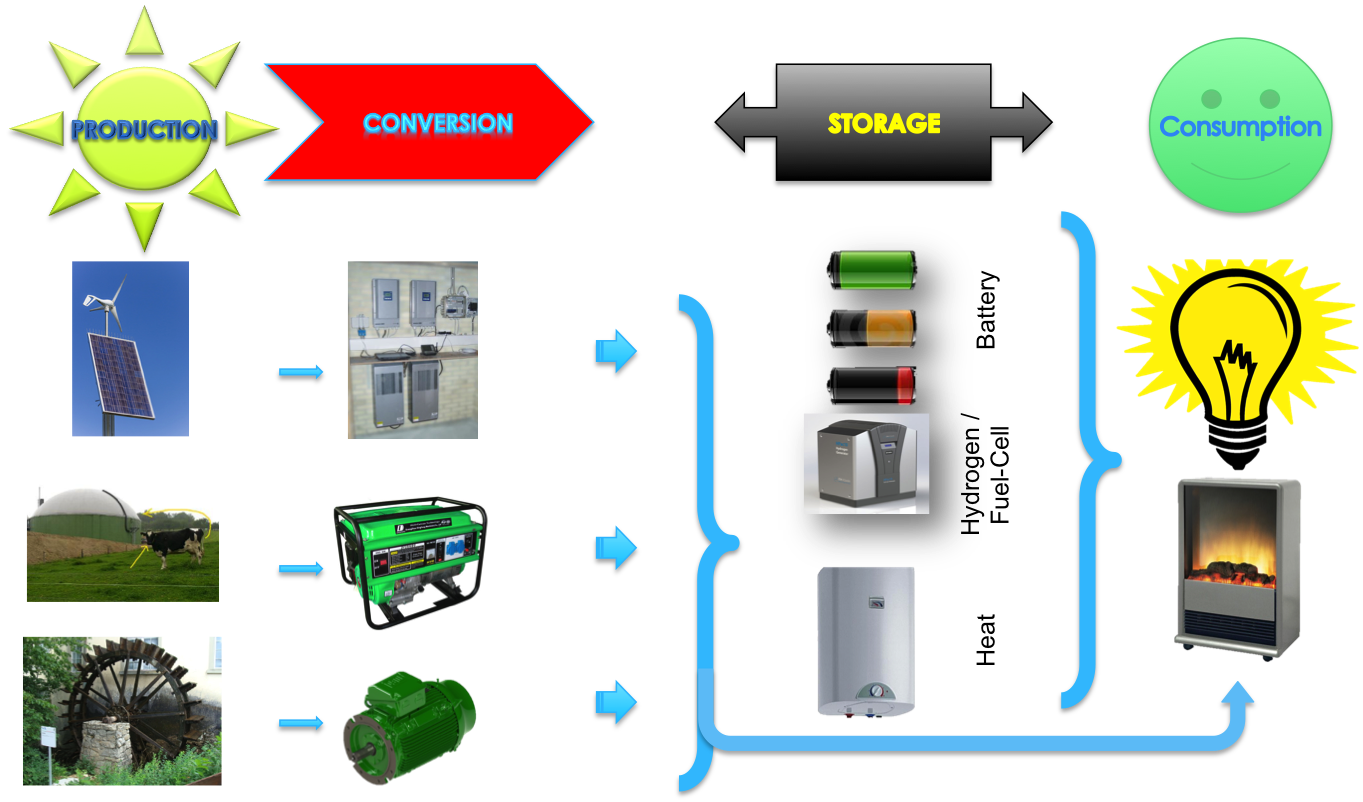 Evaluation of the different types:
Generator with a horizontal axis:

They achieve coefficients of up to 0.52.
They are pretty close to the theoretical maximum..

Generators with a vertical axes (general):

The advantage of the generators with a vertical rotor axis is, that they function more independently from the wind direction and they are more tolerant to turbulent currents (as they often are in urban areas).

The layout of the generator and control system at the basis is a great advantage during the installation, commissioning and maintenance of vertical generators.

The Darrieus rotor is, live the aforementioned generators with a horizontal axis, so called uplift generators with high rotation speeds of 5 – 8 and also require a high maintenance effort. They proved to be critical in their practical application. (Vibrations, overload protection and an imbalance susceptibility – partial icing, etc.). A 2 blade, and thus high-speed Darrieus rotor does not start by itself, it must be “started” electrically or with the assistance of a secondary turbine. The Darrieus rotors are currently the most efficient generators with a vertical axis, as they achieve coefficients of up to 0.4. The Darrieus wind generators have not yet been successful on the market, due to the aforementioned technical problems (starting, vibrations).

The newest scientific research data indicate, that the Savonius rotors can achieve coefficients of up to 0.47, by optimizing the form of the blade and the guiding apparatus, according to the performed calculations.

Numerical calculations of different aerodynamically effective formations were only possible in recent time, as a result of the increased computer performance, since these calculation processes require, even in the case of the most modern computer systems, calculation times of several weeks, for each individual optimization step.

Flow calculations and studies based on real models in the wind channel indicate that, based on these measures, there is a possibility of creating a aerodynamically hybrid system, which combines the robust characteristics of a pure resistance device with the increased performance of the lift effect. Based on this, it becomes possible, at high speeds of about 1, to achieve a power coefficient of over 0.4.

The Savonius turbine, has the potential, based on this performance, to prevail economically and technically in the field of small wind generators over the currently widespread three-blade, horizontal axis generators.

In addition to its simple structure (manufacturing and maintenance costs), there are additional advantages based on the design (no tower with costly foundation, systemic overload protection, low maintenance, ease of maintenance by ground-based equipment, low noise level as a result of the low level of rotation, no changing shadows – “disco effect”, etc.) which support the use on flat rooftops of skyscrapers, shopping centers, warehouses and agricultural buildings.

Also, based on the low noise emissions, there is a possibility of using it in residential and mixed areas. In case of installation heights of under 10 m, in many countries, the installation does not require any authorization.

Obviously, there is enough undeveloped potential in this field.

The object of business of the modulbluE GmbH is, among other, the development, construction and distribution of such small wind generators, according to industrial standards.

(Principle) Images of an optimized Savonius rotor (view from above):